From Models To Systems

Suppose we've trained and tuned a classic matrix factorization recommendation model. Let's walk through the series of practical challenges that crop up once you have a model and want to use it to make recommendations to real users. 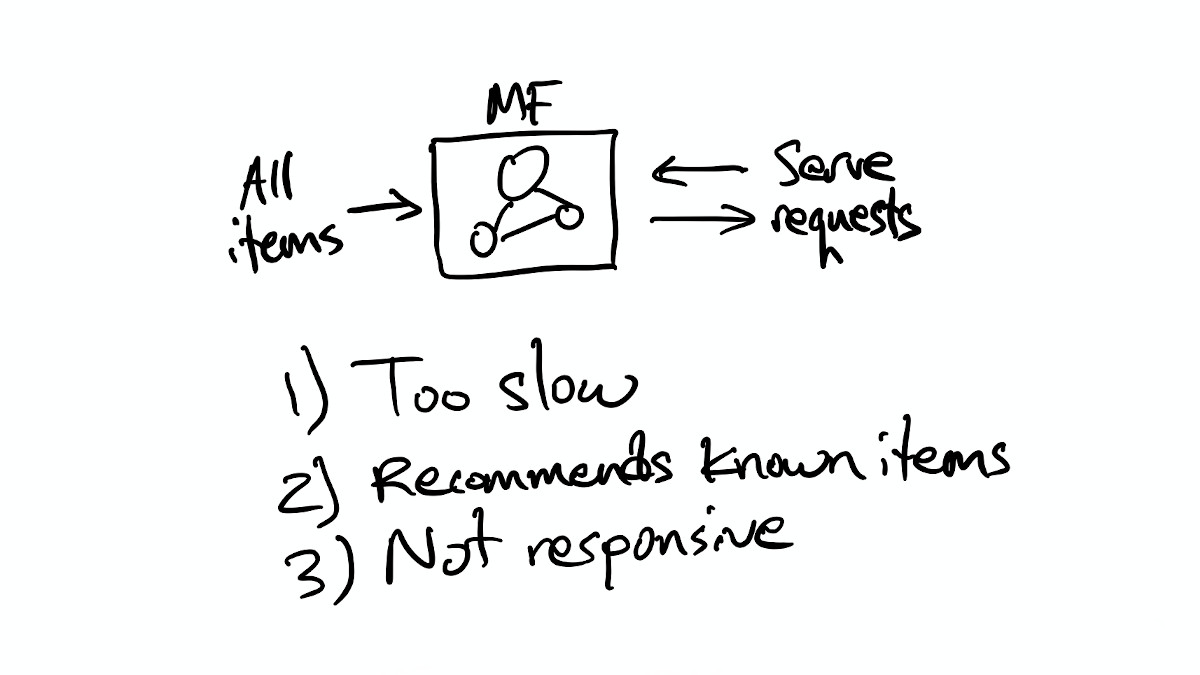 If we build a simple service around our model and try to use it to serve requests, we'll quickly discover that computing scores for all the items in our catalog is too slow to do in the request/response cycle. The recommendations are also quite likely to contain items that users have already seen, liked, or rated. (What's more similar to an item than itself?) And we'll also quickly realize that we have to retrain the model in order to generate new recommendations based on recent user behavior. Maybe we'll decide to retrain the model on a daily basis so that the recommendations stay fresh, but we won't be able to update the recommendations within a user's session to immediately respond to their actions.

Taking one problem at a time, the first obvious thing to do is move computing recommendations out of the request/response cycle and pre-compute them instead. Maybe we compute recommendations in a batch job and output them to a key/value store: 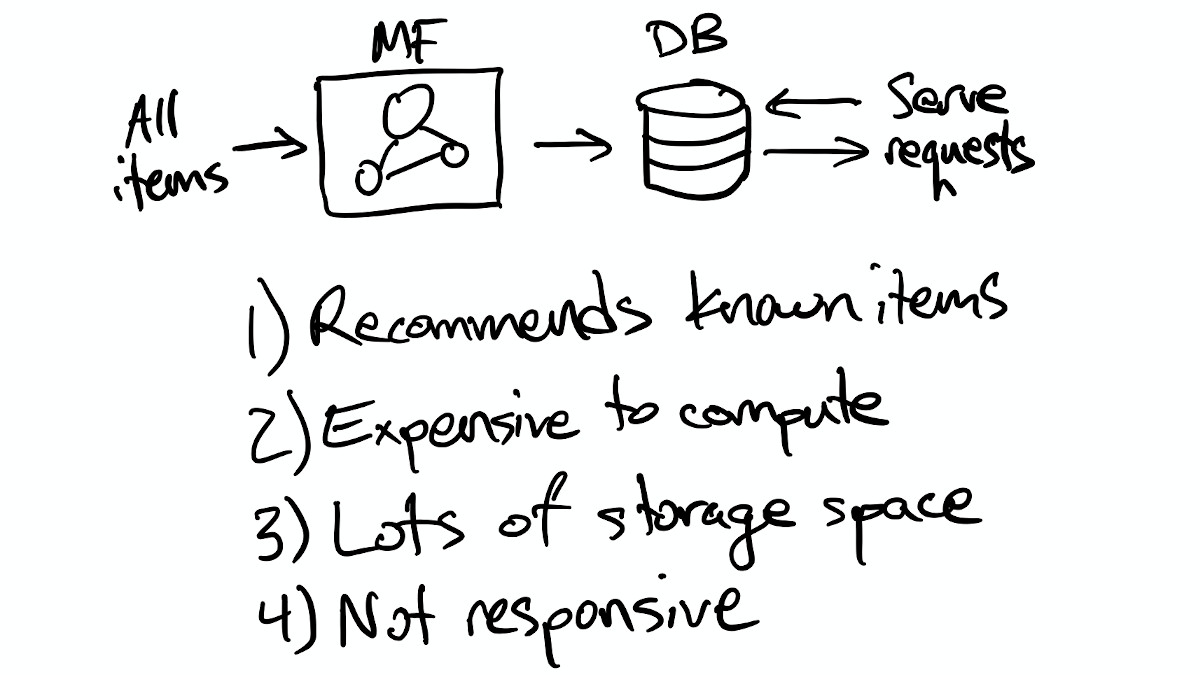 But again, taking one problem at a time, it's easy enough to insert some filtering into the batch job to filter out any items a user has previously interacted with, which improves the user experience a bit. 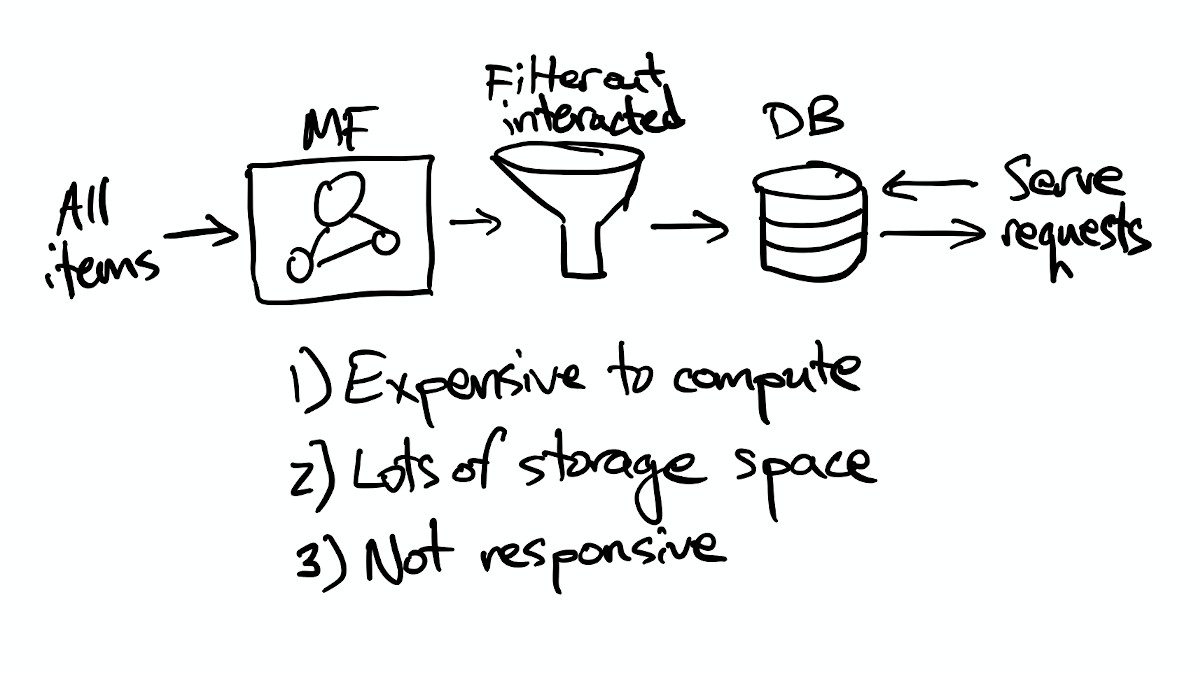 Thinking about how we can reduce the cost of computing recommendations, it's clear that most items in the catalog won't be relevant to most users, so we're wasting a lot of computing power scoring items that are highly unlikely to end up being recommended. There are two simple steps we can take: 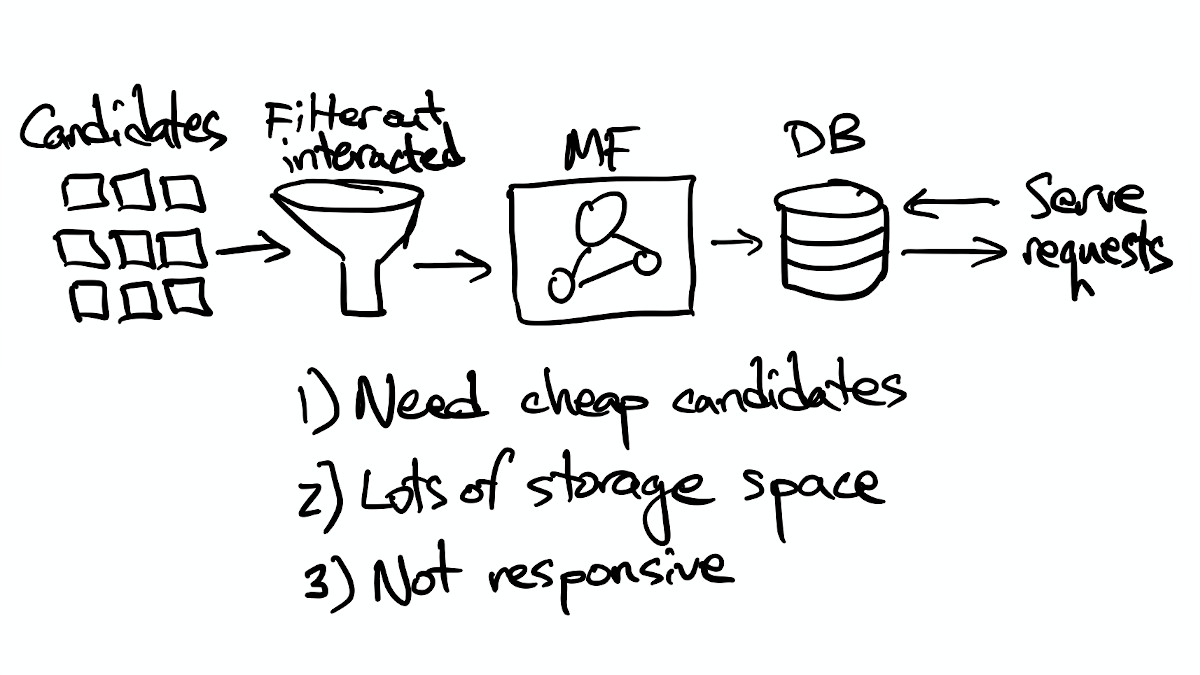 One cheap way to select candidate items is to compute how often items occur together in the same user history. We can compute co-occurrences with a batch job, and store a list of co-occurring items for each item in the catalog in a database (again, perhaps a key/value store.) Now when we want to select candidate items for a particular user, we look up what items that user has interacted with previously, find the co-occurring items for each one, and only use our model to compute scores for that limited candidate set. 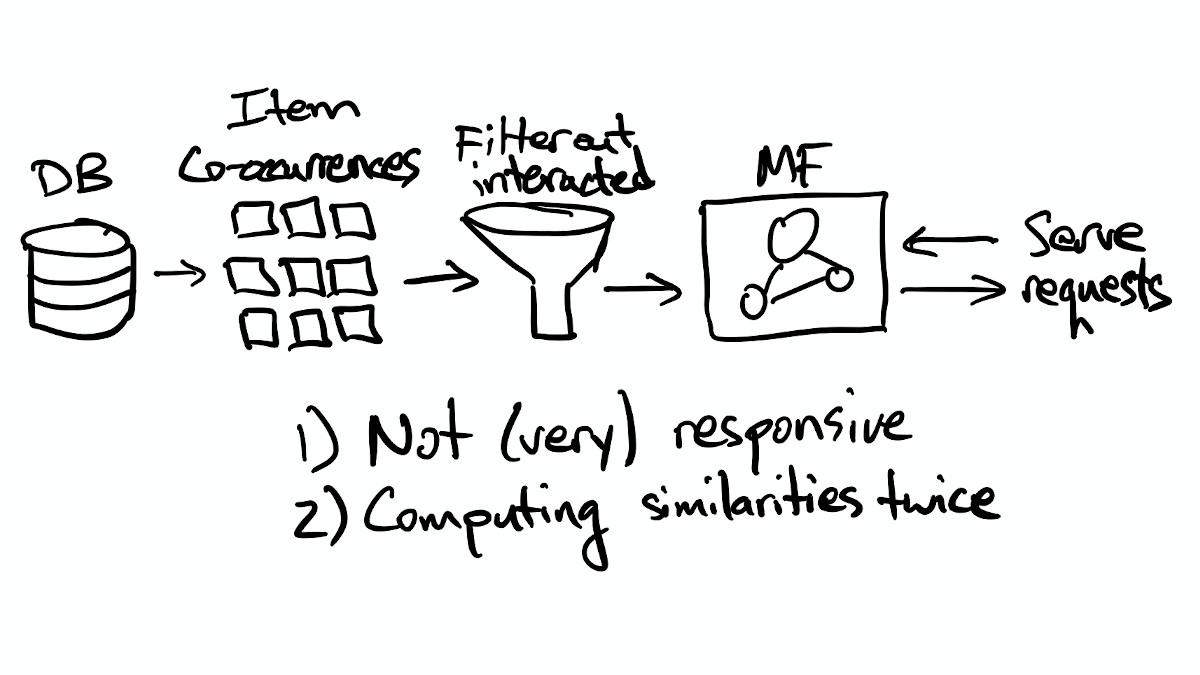 That's a little bit better, but we still have the issue our model only updates its user representations when it's re-trained. We're also implicitly computing item-to-item similarities two different ways, because we're both computing item co-occurrences to find candidate items and learning item embeddings in the model.

To improve the responsiveness of our model, we could try to train it online so that it updates user vectors every time a new interaction is logged, but there's an easier way: we can compute user vectors as sums of the item vectors for the items that users interacted with. 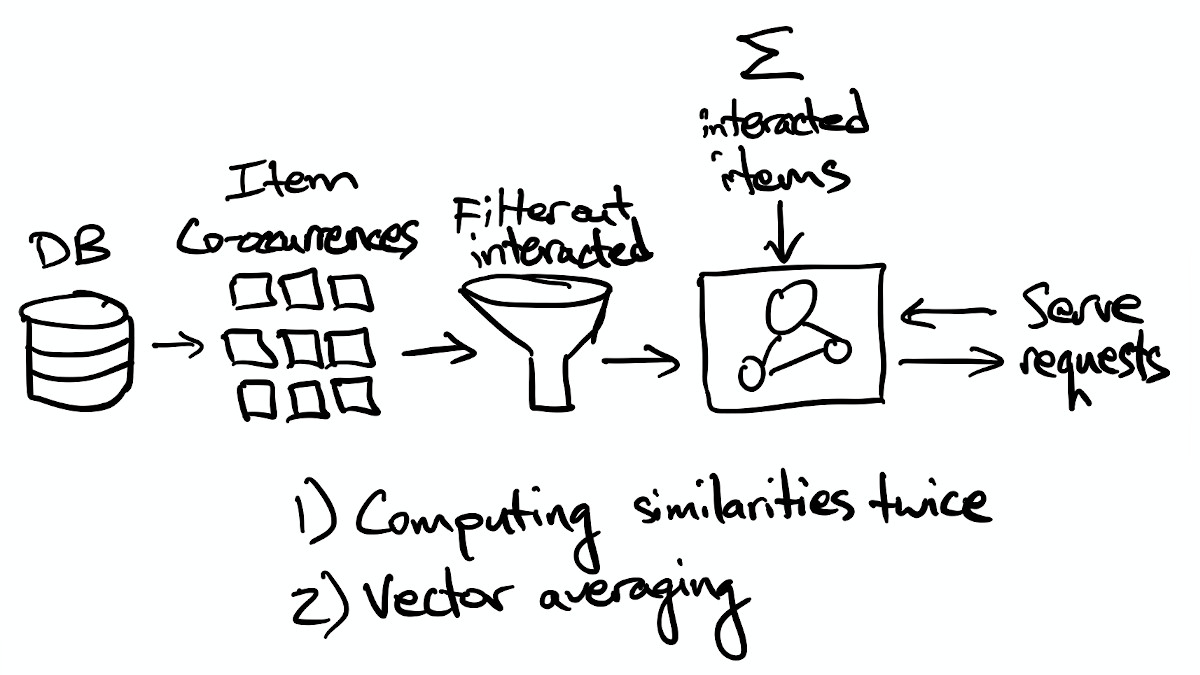 Yes, this means we're completely throwing away the user vectors learned by the model, which might mean we lose a bit of accuracy. That has significant advantages, though:

So that's better in some ways, but (of course) it also introduces new problems. If we're summing or averaging item vectors to produce user vectors, we're assuming that a user's tastes can be represented as a single point in the item space, which is a pretty limited representation. There's no guarantee that any particular user only likes one kind of item; in fact, that is probably a far rarer case than users who like many kinds of items. Vector averaging also produces weird results sometimes, since there's no guarantee that the point halfway between two different kind of items is semantically meaningful. It might represent items that are blend of the two, or it might represent something else entirely. (In practice, it usually works okay, but there are definitely exceptions.)

What can we do to stop computing redundant item similarities? Well, we could use the item vectors from our model to retrieve candidates with approximate nearest neighbor search. To do that, we'd load all of the item vectors into ANN search index, and query it with our (aggregated) user vectors: 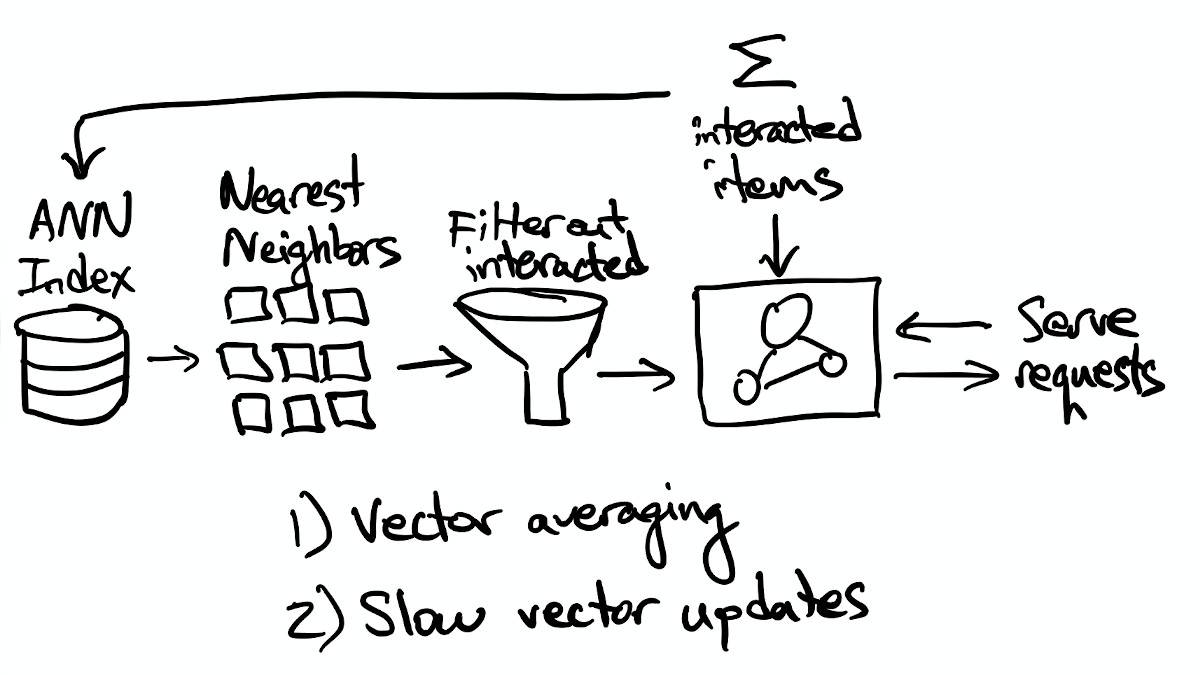 Now we get a list of candidate items for each user that are similar to the average of the other items they've interacted with, we filter out any exact matches with their interaction history, we assign a score to each remaining item, and we use those scores to determine which items to recommend and what order to put them in. We no longer need a batch job to compute item co-occurrences, but we will need to extract item vectors from the model and load them into an ANN index.

There are still some lingering issues from the process of aggregating item vectors into user vectors though, so let's see what we can do about those:

Go Forth And Build Recommender Systems

That takes us from a freshly trained model to a system that's capable of generating fresh recommendations for each user on-the-fly as requests come in. There's still a lot of room to improve this system, but you'd be surprised how many industrial recommender systems work like one of the pictures above.

If you found this useful, consider supporting my coffee consumption? :)